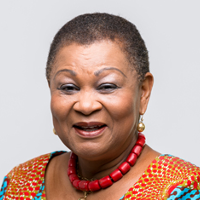 Ms. Joyce Rosalind Aryee is the Founder and Executive Director of Salt and Light Ministries. She is also a Senior Mentor for the African Leadership Initiative and the Moremi Initiative for Women in Leadership for African Development (MILEAD) Foundation.

She serves on several boards including the Databank Universal Economic School (DUES) and HGL Limited. She also chairs the One Ghana Movement. She holds honorary membership in the Ghana Association of Restructuring & Insolvency Advisor (GARIA). She has been a distinguished Fellow of the Ghana Institute of Engineers since March 2010; the Chartered Institute of Financial and Investment Analyst, September 2011; and the Graduate school of Governance and Leadership, October 2011.

Her experience in public service spans over 40 years, spanning a wide range of issues including environmental protection and public relations. She has served in the Ghana Chamber of Mines as Chief Executive Officer and the first woman to head an African Chamber of Mines. Due to her leadership of excellence and immense contributions to the mining industry, she was conferred an honorary doctorate degree in July 2009 by the University of Mines & Technology (UMaT).

Ms. Joyce Aryee received the Companion of the Order of the Volta, Ghana (CV) award by His Excellency the President of the Republic of Ghana in 2006; the CIMG Marketing Woman of the year 2007, and the African Female Business Leader of the Year 2009 by the African Centre for Economic and Leadership Development. She was awarded as the Inspirational Woman at the Ghana UK Based Achievement (GUBA) Awards 2015 for breaking glass ceilings and being the first female to head an African Chamber of Mines. In 2014, she was honored the Public Relations Personality of the Year by the Institute of Public Relations Ghana.